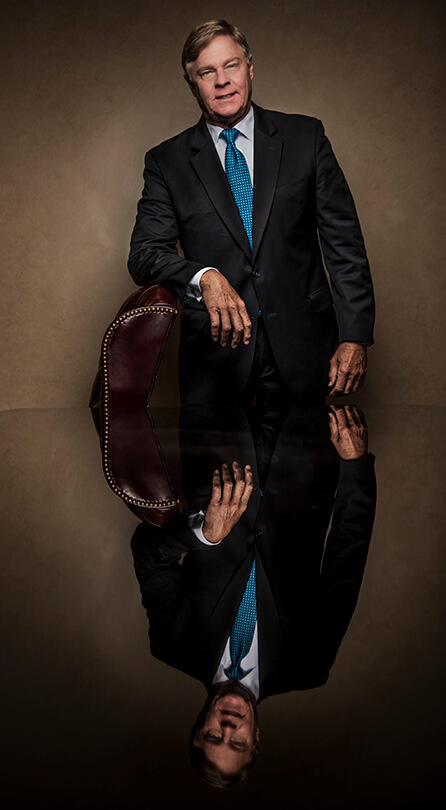 For the past 44 years, Chris Searcy has litigated cases involving catastrophic injury and wrongful death throughout the State of Florida and in other states as well.  In 1977 at age 29, he became the youngest lawyer in the United States to achieve a $1 million dollar verdict for a single personal injury case.  Since that time, he has compiled a long list of seven and eight figure verdicts and one nine figure verdict.  In 2007, he achieved four eight figure verdicts in four different jury trials totaling over $100 million.

After earning a B.A. with distinction from the University of Virginia, Mr. Searcy received his Juris Doctorate from Stetson University College of Law, graduating in the top 10% of his class.  He was admitted to The Florida Bar on May 1, 1973.  He is admitted to practice in all Florida State Courts, as well as all United States District Courts in Florida, as well as the Eleventh Circuit Court of Appeals and the United States Supreme Court.  He is Board Certified in Civil Litigation by the National Board of Legal Specialty Certification (formerly known as the National Board of Trial Advocacy) and Board Certified in Civil Litigation by The Florida Bar Association.  He heads the firm of Searcy Denney Scarola Barnhart and Shipley, P.A., a firm composed of 31 lawyers and over 100 personnel, with its main office in West Palm Beach, Florida.

Chris Searcy has been selected for inclusion in The Best Lawyers in America in every edition since its inception 30 years ago.  He was ranked as the #1 Lawyer in Florida in the 2013 Florida Super Lawyers Nomination, Research and Blue Ribbon Review Process.  He is listed as one of the “Legal Elite” in Florida Trend magazine; named as one of the top lawyers in South Florida Legal Guide; and selected one of Lawdragon’s 500 Leading Lawyers in America “Hall of Fame.”

From a community perspective, Chris Searcy’s personal philosophy of advocacy for those in need has made its mark on South Florida, where he and his firm support numerous non-profit organizations committed to helping the disabled, improving education, and advancing community causes.