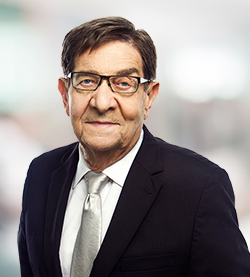 He is a member of the Inner Circle of Advocates, an organization limited to 100 members throughout the country, and has been listed in every edition of the publication 'Best Lawyers in America.'

Mr. Levin received the 'Perry Nichols Award' in 1994, which is the highest honor bestowed by the Academy of Florida Trial Lawyers, and is given in recognition for a person's lifetime achievements in the pursuit of justice. The late Chief Judge in Escambia County, Florida, stated the following to The Florida Bar about Mr. Levin: 'He is the best we have in the First Judicial Circuit and probably in the State of Florida. . . . . He has, and deserves, a reputation for being one of the best trial attorneys in the nation.'

Mr. Levin has managed the careers of many champion boxers. In 1995, he was selected as National Boxing Manager of the year.

For the year 1999, the National Law Journal named Mr. Levin as the top civil litigator in Florida. This honor encompassed plaintiff and defense counsel. Mr. Levin was also named in the October 4, 1999, edition of the National Law Journal as one of the 'Top Ten Litigators for 1999', which again included both plaintiff and defense counsel. Also, in 1999, Mr. Levin was honored at the United Nations by being made a Chief in the Republic of Ghana, one of only two non-Ghanians ever so honored. This honor was bestowed on Mr. Levin because of his lifetime of dedication to equal justice for people of all races. At the same time, Mr. Levin received a citation honoring him by the United States Congressional Black Caucus.

When asked about his greatest accomplishment, however, Mr. Levin states he is most proud of his idea in 1993 of rewriting the Florida Medicaid Third Party Recovery Act to permit the State of Florida to sue the Tobacco Industry to recover expenditures for treating illnesses caused by cigarette smoking. Mr. Levin wrote the legislation, and was instrumental in its passage. Immediately after its passage, the legislation was described as 'the single biggest blow against the tobacco industry in United States history.' The legislation eventually resulted in a $13 billion dollar settlement for the State of Florida.

In 2007, Mr. Levin was voted the #1 most influential and powerful man in Northwest Florida by the Independent News.