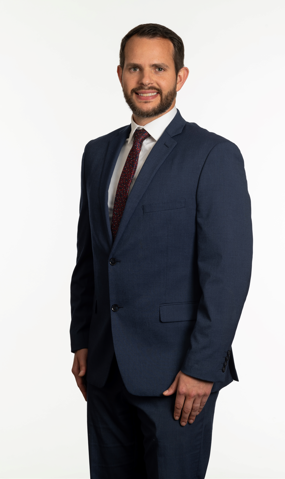 Michael Perenich is a third generation personal injury attorney. His grandfather, Guy Perenich began the firm now known as Perenich, Caulfield, Avril, and Noyes in 1955. Following in his father’s footsteps, Michael’s father Mark began working for the Firm in 1984. Michael was born in Clearwater, raised in Tarpon Springs. He graduated from East Lake High School then studied Philosophy, and graduated from the University of South Florida.

While at the University of South Florida Michael was selected to be a member of the Ethics Bowl team. Michael led the team to a third-place finish in the southeast region. While at USF he was elected to be the Vice President of the Philosophy Organization. After USF, Michael attended Loyola University, New Orleans College of Law. While in law school, Michael interned for Honorable Judge Robert Morris of the Second District Court of Appeals. He also participated in a study program in Budapest Hungary, and Istanbul Turkey (International Transactions, and Central European Legal Systems). During his third year of law school, he was accepted to study at the University of Florida Levin College Of Law where he received the Honorable R. Grable Stoutamire Book Award in American Legal Thought, as well as a distinction in Trial Practice.

Professionally, Michael focuses on building relationships with clients through empathy, hard work, and honesty. Michael continues to work on his skills as a lawyer, through cutting edge seminars and applying these skills in practice.