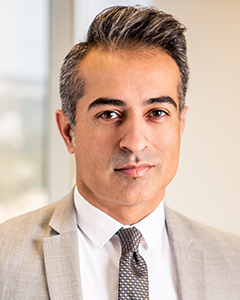 A. Ilyas Akbari is a senior partner and bioengineer at Wilshire Law Firm. He is an experienced aviation litigator and director of the firm's aviation litigation team, having worked on over 200 aviation cases since 2005. Ilyas has litigated crashes and incidents involving commercial airlines, charter operations, general aviation aircraft, military aircraft, seaplanes, and rescue and air ambulance aircraft, in addition to litigating product liability claims against many of the aircraft and component part manufacturers - this includes 29 cases against Robinson Helicopter Company, Inc.

The National Law Journal and ALM Media recognized Ilyas and his team in 2018 as Elite Trial Lawyers finalists in the Consumer Protection category for their achievement in representing the family of the only two American residents onboard Germanwings Flight 9525, whose co-pilot committed suicide by locking out the pilot and crashing the plane into the French Alps, killing all 150 souls. On the heels of the Daimler and Bristol-Myers Squibb opinions, and despite the airline not having any offices, employees, planes, equipment, routes or advertisements in the U.S., and never paying taxes in the U.S., he argued that Virginia’s long arm statute conferred personal jurisdiction over it because the German airline sold its tickets to passengers that resided in Virginia through its authorized agent and proxy, United Airlines. The Eastern District of Virginia agreed, in a published opinion, Selke v. Germanwings GmbH, 261 F. Supp. 3d 645 (E.D. Va. 2017).

Ilyas serves as Plaintiff Vice Chair to the Aviation and Space Law General Committee of the American Bar Association and is, additionally, the Editor of the ABA Aviation and Space Law Committee Newsletter for the 2020 calendar year. He is also honored to serve as Fellow in the Litigation Counsel of America, an invitation-only trial lawyer honorary society representing less than one-half of one percent of American lawyers.

Best Lawyers in America® has recognized Ilyas in the Plaintiffs Product Liability Litigation category since 2016; Southern California Super Lawyers® has listed him as a top rated Aviation & Aerospace attorney since 2007. Additionally, Ilyas has been honored as a Southern California Super Lawyers® - Rising Stars, Up and Coming 100; the National Trial Lawyers: Top 100 Civil Plaintiff Lawyers; the Aviation Trial Lawyers Association: Top 10; and Nations Top One Percent, National Association of Distinguished Counsel.

Ilyas earned his B.S. degree in Bioengineering in 2000 from U.C. San Diego. U.C. San Diego's prestigious Bioengineering Department is consistently ranked as one of the top five programs in the world. While at U.C. San Diego, he was the founding Vice President of the International Society of Pharmaceutical Engineers. It was through this society that Ilyas met several scientist-attorneys, who inspired him to continue on to Southwestern University School of Law. While at Southwestern, he had the honor of serving as President of the Student Bar Association. He was also a Certified Law Clerk at the District Attorney's Office in East Los Angeles, where he conducted preliminary hearings and misdemeanor trials.

Ilyas’ bioengineering degree has proven very beneficial. In fact, Ilyas is in his element when he can blend his expertise in science and law. Whether it is finding the mechanism of injury, understanding the lasting effects of traumatic brain injuries, or investigating and determining the engineering flaw that caused an aircraft crash, Ilyas devotes himself to the pursuit of truth through the scientific process.

In addition to aviation cases, Ilyas has been involved in many high profile crashes involving trains, buses, tractor trailers, school buses, and duck boats, including the 2015 Duckboat crash in Seattle, which resulted in a $20 million verdict for two college-aged boys in Austria that lost their mother while she was vacationing in Seattle.

Ilyas also represented clients in some of the largest rail disasters in the country, including the 2017 Amtrak Cascades 501 derailment near DuPont, Washington; the 2015 Amtrak 188 derailment cases in Philadelphia; the 2012 CSX coal train derailment in Ellicott City, Maryland; and was on the leadership team that litigated the two largest commuter rail disasters in Southern California: the 2005 Glendale crash and the 2008 collision in Chatsworth.

Never one to back down from a challenge or an injustice, Ilyas has also successfully taken on pharmaceutical companies, and has been court-appointed to serve, on behalf of all filed cases, as a member of the Plaintiffs’ Steering Committees for the Bisphenol-A (BPA) Polycarbonate Plastic Products Liability Litigation and the Heparin Products Liability Multi District Litigation (MDL).

Ilyas is often called upon by the media to comment on his cases or the news of the day, and has appeared over 2,000 times internationally in tv, print and radio.

One of the roles that Ilyas takes most seriously is that of mentor to younger attorneys or attorneys that are inexperienced and need advice, which is why he is called upon and speaks at conferences and conventions all over the world, so that other lawyers can learn and better represent their clients. He is known for freely taking the calls of attorneys that he does not know in order to assist them on various issues. This included a firm that needed help on a rapidly approaching brain injury trial, so Ilyas traveled to Trinidad, Colorado where he acted as consulting counsel (free of charge) for a firm that represented a high school student that suffered a brain injury during football practice, resulting in a $11.5 million verdict in 2013 (Ridolfi v. Riddell).

Ilyas has helped recover awards and settlements totaling over $364,000,000.

Inversiones Papluchi S.A.S. et al, Petitioners v. Superior Court of Los Angeles County, Respondent; Robinson Helicopter Company, Inc., et al., Real Parties in Interest, 20 Cal.App.5th 1055 (Feb 14 2018 CA App 2nd) [Preemptory writ of mandate issued overturning and directing trial court to vacate its prior order denying plaintiffs' Colombian corporations' motion to quash service of summons and motion to dismiss cross-complaints, and to issue a new order granting plaintiffs' motion to quash and motion to dismiss cross-complaints against them, dismissing Robinson Helicopter Company, Inc. (for failure to timely effect service within 3 years of filing cross-complaint), Rolls-Royce Corporation and Honeywell (for each failing to adhere to article 19 of the Hague Service Convention)]; the case is often cited as a primer on how to effectuate service of process according to the Hague Service Convention.

Selke v. Germanwings GMBH, 261 F.Supp.3d 645 (E.D. Va 2017) (Virginia court agreed with Ilyas that it had personal jurisdiction over a German airline despite the airline not having any offices, employees, planes, equipment, routes or advertisements in the U.S., and never paying taxes in the U.S., in that Virginia's long arm statute conferred personal jurisdiction over the German airline because it sold its tickets to passengers that resided in Virginia through its authorized agent and proxy, United Airlines; Ilyas represented the family of the only two Americans onboard Germanwings Flight 9525 from Barcelona, Spain to Düsseldorf, Germany, whose co-pilot committed suicide by locking out the pilot and crashing the plane into the French Alps, killing all 150 souls.