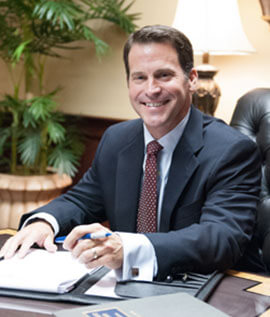 With an exclusive focus on personal injury cases, Jim Parrish is committed to demanding justice for those who have been seriously hurt due to negligence. In addition to his years of experience fighting for the rights of injured people throughout Northern Virginia, Jim also spent several years on the other side of the table, representing large insurance companies and gaining a keen understanding of how they operate.

Jim Parrish focuses his practice exclusively on personal injury and accident cases. As a former partner in one of Northern Virginia’s oldest trial law firms, he worked alongside two members of the American College of Trial Lawyers, which is widely recognized as the most select group of trial lawyers in the nation.

In 2014 and 2015, Parrish Law Firm, PLLC won the AVVO Client’s Choice Award and the Client Satisfaction Award from the American Institute of Personal Injury Attorneys (AIOPIA). Jim’s reputation as a leader in his field means he is invited by attorneys’ groups, corporations, businesses, and law enforcement agencies to educate and conduct seminars on various issues related to personal injury law.

Jim is a graduate of the University of Virginia, which consistently ranks among the “Top Ten” law schools in the country.

Eli’s Heart – Board of Directors

Py vs PD – Board of Directors