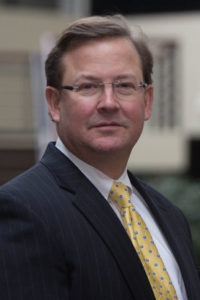 Dale Golden graduated from the Cumberland School of Law, Samford University, Birmingham, Alabama and was admitted to the Kentucky bar in 1989. Dale is nationally certified as a Civil Trial Specialist by the National Board of Trial Advocacy, which is accredited by the American Bar Association. (Note: Kentucky does not recognize specialties in fields of law). Dale is a member of the Class Action Trial Lawyers Association based on his knowledge and experience in class action lawsuits. He is a member of the Million Dollar Advocates Forum that requires each member to have received a verdict and final judgment from a trial in the amount of $1,000,000 or more. Likewise, the Multi-Million Dollar Advocates Forum requires a jury verdict and entry of a judgment in an amount in excess of $2,000,000. Dale has obtained an eight figure jury verdict in a bad faith claim brought against an insurance company. He is also a member of the American Association for Justice Top 100 Trial Lawyers for the state of Kentucky. Dale has extensive trial experience and has successfully handled many complex cases involving fatalities, brain injuries, environmental class actions, and other catastrophic injury cases.

In 2012, Dale achieved a number one ranking by the Kentucky Trial Court Review for the most cases tried in the state of Kentucky for that year. He has given seminars on insurance bad faith to members of the Fayette County Bar Association, as well as several of the nation's largest insurance carriers. Dale has successfully defended several insurance companies in bad faith claims and has also experienced success in pursuing bad faith claims against other companies. Having successfully worked both the defense and plaintiff side of insurance bad faith litigation, Dale has a global perspective that provides for knowledgeable insight to consistently achieve success in those cases. In addition, Dale has successfully handled cases involving the following subject matters:

One of Dale's most recent settlements involved a case against Howard Berger Manufacturing of New Jersey. Dale filed a Complaint alleging that a defective space heater was responsible for the death of an individual. By working with experts from the Kentucky State Police and local Fire Marshall's Office, in conjunction with retained experts who testified about cause and origin as well as the most likely product defect, the case was settled for $3.89 million dollars. The same preparation and hard work that was responsible for the result in the Howard Berger case is the same work that goes into other cases involving medical malpractice, nursing home abuse, and catastrophic injuries.

Dale has handled numerous cases involving catastrophic injury as well as death. These complex cases have provided him knowledge and experience in hiring and working with the best experts in each respective field. Dale represented one of the largest trucking companies in the nation for over ten years. In addition, his defense work in defending insureds in automobile accidents, has required him to work extensively with experts who conduct accident investigations. This includes experts who perform Total Station Accident Reconstructions for collisions that result in fatalities. By working closely with these experts as well as the Kentucky State Police, he is able to preserve evidence immediately after a motor vehicle collision that otherwise may be lost due to the passage of time. Identifying witnesses and other potential Defendants is of paramount importance immediately after a catastrophic collision. He also has experience in crashworthiness cases wherein he contested the crashworthiness of a school bus wherein several children were killed and/or injured. By identifying alternative, economically feasible, safer designs, a manufacturer of a vehicle can be found liable for its product. Dale is familiar with these complex areas of law and the experts needed to support a winning case.