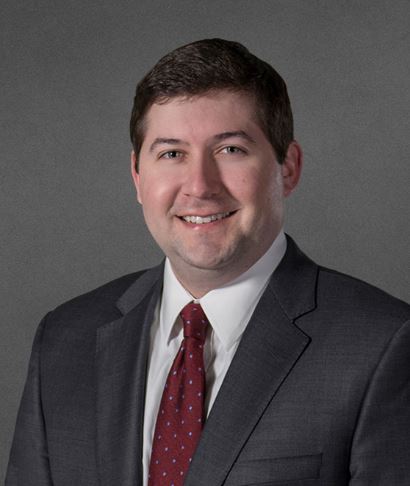 Born and raised in Goldsboro, North Carolina, personal injury attorney Jonathan M. Smith now uses his legal skills to serve this same community. He takes pride in helping personal injury and workers compensation clients at Riddle & Brantley. In fact, Jonathan joined the firm right after graduation, and he has been a member of our legal team ever since. In 2015, he became Vice President of Riddle & Brantley and now helps with the overall management of the firm.

As a Goldsboro personal injury lawyer, Jonathan has received numerous awards and accolades within the legal industry. This includes the prestigious National Trial Lawyers: Top 40 under 40 award.

Jonathan attended Appalachian State University where he studied business administration, graduating in 2007. Then, he received his law degree from the Norman Adrian Wiggins School of Law at Campbell University. He graduated in the top ten of his class and received book awards denoting the highest level of academic achievement in seven of his classes.

In his practice as a Goldsboro personal injury lawyer, Jonathan represents victims of accidents such as car crashes and truck accidents. He is also part of our workers compensation team, assisting North Carolina employees after a work injury.

Family is one of the most important things to Jonathan. He enjoys being close to his father, mother, sister and brother-in-law, who all practice dentistry in Goldsboro. When he is not practicing law, Jonathan enjoys gardening, cooking and traveling, as well as spending time with his wife, family and friends.