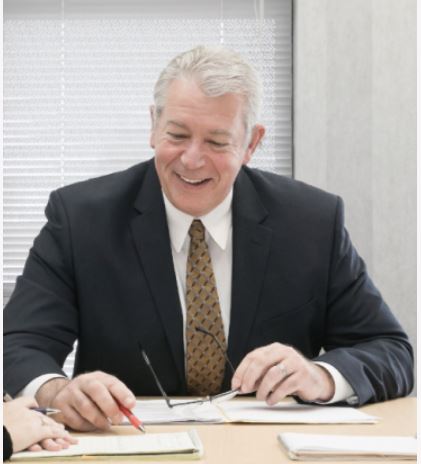 Dennis VanDerGinst is the President/CEO of VanDerGinst Law. He supervises all cases within the firm. His primary practice focus is on all areas of personal injury litigation, including but not limited to, general negligence cases, product liability, medical malpractice, and mass/class actions.

Mr. VanDerGinst received his law degree from DePaul University in 1989. He is licensed to practice law in Illinois, Iowa, and the Federal Courts. During his career, he has represented clients in almost every state in the country.

Mr. VanDerGinst has been rated “Superb”, with a 10/10 rating from AVVO Lawyer Rating Service. He has also earned the “Client’s Choice Award” from AVVO. He has been rated “AV Preeminent” by Martindale-Hubbell Peer Review Ratings, awarded only to those lawyers who have demonstrated the highest ethical standards and professional responsibility, He has been selected as one of the “Top One Percent” of attorneys in the nation by the National Association of Distinguished Counsel. He has been named one of the top trial attorneys in the country by the American Trial Lawyers Association and the American Society of Legal Advocates. He has been presented with the Albert Nelson Marquis Lifetime Achievement Award by Marquis Who’s Who. His tremendous success is also illustrated by his membership in the Multi-Million Dollar Advocates Forum, which is limited to those attorneys who have secured multi-million-dollar verdicts and settlements, which Dennis has done numerous times. In addition, Dennis has earned dozens of other awards and accolades during his prestigious career.

Mr. VanDerGinst is a former adjunct professor of torts and insurance law at Black Hawk College and he continues to speak at seminars, conferences and conventions around the country on various issues surrounding injury law. He has been very active in several counties, state, and national bar associations and trial lawyer associations. He has served on the Board of Managers for the Illinois Trial Lawyers Association. He has been a State Delegate for the American Association for Justice and has served on the Board of Trustees for the Pound Civil Justice Institute. He has also authored several law-related articles in several professional journals and magazines.

Through Mr. VanDerGinst’s leadership, VanDerGinst Law has donated countless hours and millions of dollars to organizations and causes that fall within the firm’s mission of helping children, the elderly, and veterans. He resides in Davenport, IA with his beautiful wife, Deana, and is bonus dad to four amazing kids. He is also grandpa to an adorable little boy.

Life Member of the National Registry of Who’s Who

Who’s Who in American Law

Who’s Who Among American Law Students,

Who’s Who Among American College Students.

Sports Editor of the college newspaper.